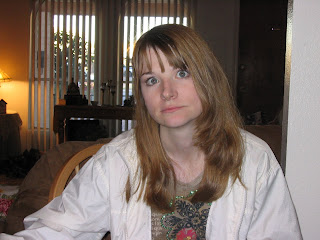 Keep this in mind as you read this chapter. I had no one to stop me from the course I was on to commit suicide. I didn't have friends I could talk to. I didn't have family near me, and I wasn't communicating my intent to my mother or to the members at my church. I only had one person to stop me, to save me. I should have died.

I'm posting a picture of what I looked like two months AFTER the attempt to show how thin and sickly I looked. My ex took it when I moved to Mesa. Enjoy chapter five and most important, believe in chapter five.

So where was this miraculous being called God everyone told me about? I was raised Catholic, went to church off and on, and knew about God and Jesus. Something happened to me as I ambled along the Jasmine-scented path where fluffy bunnies hopped merrily among the lollipop trees. Somewhere in my journey through life, the fluffy bunnies grew fangs, and the lollipops became poisonous. Somewhere something had gone horribly askew, and as I walked with God, I became angry with Him.

God was supposed to fight for me. So where was he? Was He angry with me? Most of my life I had forsaken Him because I thought He abandoned me during my darkest hours as a child. Never did He rescue me from the people who hurt me. To me, God was an absentee landlord who couldn’t manage the world He created. I needed proof that God was real and living and wanted to be a part of my life.

“All I ever wanted was unconditional love and for someone to not be disappointed in me,” I cried out. I didn’t expect an answer.

Suddenly, this warm, loving feeling overwhelmed me. My tear-filled eyes looked to the ceiling. This feeling wasn’t foreign to me. So many times when I was in pain growing up and called out to God, I felt this same sensation, but didn’t understand it. Now I finally did. I knew God was hugging me, and it was the most wonderful feeling I had ever experienced. For the first time, I realized God had always been with me even when I thought He was absent.

God won the argument. I got in my car and drove down McCulloch to find one. The first two I came to were closed! What, no one works during the week? Frustrated, I decided to go home. I saw the sign Abundant Grace. Figuring it, too, was closed, I continued on; however, God directed the steering wheel into the parking lot, carried me in and placed me before the pastor’s wife as if saying, “Take care of my child.”

Abundant Grace became my home for three months. In the beginning I went in the afternoons to talk to the pastor’s wife, Aletha, or just simply sit and talk to God. Feeling stronger, I joined the women’s Bible study group, then Sunday morning services. I felt at peace in the little sanctuary and not at home.

I believed God was working on Steve when he admitted he was confused and wanted us both. We decided to go away to Las Vegas for the weekend, but it was a disaster. On the way I took a wrong turn, and we got into another fight. He e-mailed his ex-wife right in front of me on his cell phone at the hotel. I didn’t know which one I wanted to throw out the window first. We stayed the night and drove home in silence. He ordered the divorce papers. I stopped eating again.

Steve was called to Peach Springs to work in their clinic for the week. I lay alone once more in my Charmin-quilted bed. I now was a frail ninety pounds and still losing weight. With each beat, my heart withered in agony. Pain coursed through my veins like razors. If I departed from my bed, I fell to the floor after five shaking steps. Death felt only hours away.

“God, I don’t want to live. I don’t want this life,” Cupping my hands on my heart, I presented my life before Him and dumped it upon the bed. “I’ve failed at everything I’ve ever done. If you want me to live, then you have to take over my life. You have to fix it.” I fell asleep believing I would not wake up.

Something is going to happen, the voice repeated as I woke up.

The entire day I anxiously waited. Feeling like a child at Christmas, I imagined picking up my present. It had no weight. I shook it, but there was no sound. Carefully, I pulled at the tape, but God’s tape was secure. I put the present down and just stared at it all day, waiting for the thing to open. Finally, I went to bed.

Hanging my cross from the lamp in front of my candle, I turned out the lights. The soft, reassuring glow illuminated my cross, comforting me. Wearing both wedding rings, I stretched my arm across the bed where my husband should have been and closed my eyes.

My ring hand began tingling, and the hair stood up. I kept my eyes closed. The “electricity” went up my arm and down my back to my toes. Whatever was happening intensified. I thought my body was going to burst from the immense love and peace pouring into it.

A smile stretched across my worn, tear-streaked face as I soaked up the feeling. I had hope, for the first time since the divorce began, that I had a future. During the midnight of my life, God took away my melancholy sack cloth and breathed new life into my dying body.

Are you ready for the ride of your life? Only it wasn’t a question.

“Yes, God, and it’s about time!” Then, “Use me as your vessel. I am yours. Bring me the sick, the hurting and the dying. I want to do for them what you just did for me.” I had no idea what made me ask. I had no idea what I was even asking. It just came from my unselfish heart.

Walking the peaceful foothills of Lake Havasu the next morning, I looked up at the azure canvas above. Circling me were countless Angels. Every cloud actually resembled an Angel in flight. Was I the only one seeing this? No. I’m not seeing this. This is ridiculous.

“Inspire? You want me to inspire people? Are you kidding me?” I laughed in frustration. How could I inspire someone when I needed inspiration myself? I looked like an Auschwitz poster child.

To purchase a copy of the entire book:

http://www.amazon.com/Making-Lemonade-Spiritual-Journey-Through/dp/0595531148/ref=tmm_pap_title_0
Posted by Discover Your Wings at 1:08 PM